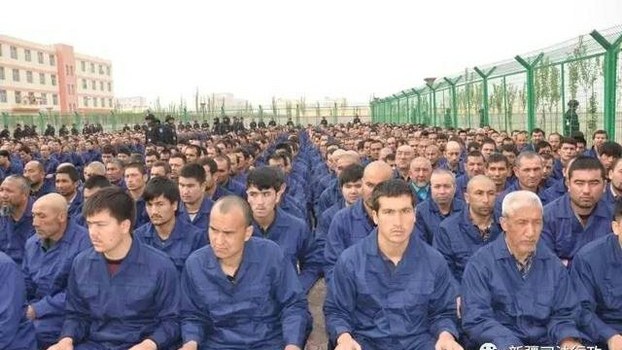 “Training” in the camps consists of compulsory remedial Mandarin studies, and indoctrination in the supreme wisdom of the Chinese Communist Party. This takes place under conditions of 24-hour surveillance, strict discipline requirements (e.g. sitting in a correct position) and cruel punishments for behavioural violations (administration of electric shocks).

Chinese officials adopted this policy, amounting to cultural genocide, since 2014. Prior to that, oppression of national and religious identity was social controls (e.g. banning beards and headscarves, fasting and praying at work). The policy shifted after 2009 riots by Uyghur people in the regional capital Ürümqi including clashes with Han Chinese people.

The Chinese government says the population is in the grip of nationalist separatism and “terrorism”. That is untrue, but could never justify mass internment and human rights abuses on this scale. It is no accident that the area is a source of natural resources, industrial zones and major infrastructure projects.

According to the documents sent to an investigative news agency and obtained by Panorama, there is a camp for every town in the region and hundreds or thousands in each camp. Panorama says somewhere between 900,000 and 1.8 million people are or have been detained (Uyghur groups say more). The Uyghur Human Rights Project (UHRP) estimates that some 435 intellectuals (students, teachers and researchers) have been imprisoned or disappeared.

One woman on the programme told how her husband had been arrested and detained for having Whatsapp on his phone. She has had no contact or news of him since then. The leaked documents documents detail how 457,000 people were targeted for investigation by the Chinese state for having another data sharing app on their phones. The document advises that if it is not possible to eliminate suspicion of these people they should be detained for “concentrated training”.

The only way to get of these camps is to acquire merit points through compliance with the programme which should last at least one year. Even then, four committees have to see evidence of “transformation”.

Despite a year of more intensive exposure the Chinese government insistes reports of the camps are smears. They say the camps are vocational training centres and Muslim minorities are have religious freedom. Yet since 2016 there has been a programme of mosque destruction in the area.

Some few on the left (who have fantastical illusions in the “Chinese road to socialism”) say western opposition to the camps is hypocritical (and by implication the camps are justifiable to serve the long-term purposes of the Chinese regime). Many more simply ignore this atrocity. But then a majority of countries in the UN have backed China in its “war on terror”, including Muslim majority counties like Pakistan, regional powers like Russia, and Cuba and Venezuela. All of these countries rely on or fear China’s economic dominance.

Uyghur Solidarity campaign, organising a protest of the Chinese Embassy in London (Portland Place) from 6pm on the 5th of every month. Next protest 5 December.

Report on destruction of mosques from Ugyhur Human Rights Project

View all posts by socialistfeministcampuscollective